Back in 2001, I used to carry a Canon Digital IXUS/Elph everywhere I went. I took photos on my way to work, in the office and with friends in the weekends. Like a reflex, like bicycling, whenever I found myself with a photo opportunity I would fling the camera out of my pocket, position and shoot. For me, it was half the fun editing everything in Photoshop.

At this time a DSLR was way too expensive for an enthusiast amateur like myself and the old non-digital SLR was laying around at home collecting dust as it was too heavy to carry around at all times and of course because of the not-so-instant developing process. There were no iPhones and hardly any phones at all with a decent camera built-in. So, there was really just one alternative available for me, and the IXUS felt like the best digital camera I could own at the time.

I am sure a lot of people have found their compromise between image quality and portability in a reasonably affordable digital camera since 2001, but for me it was not until ten years later with the Fujifilm Finepix X100 that I found mine.

I remember longing for the X100 before it was even released as I vacuumed forums and YouTube reviews that appeared around the Internet. I read everything that I could come by and I remember thinking that this could be what I had been waiting for. It came in this really refreshing and relatively small form factor – and hey, it actually sported a near-full frame sensor! 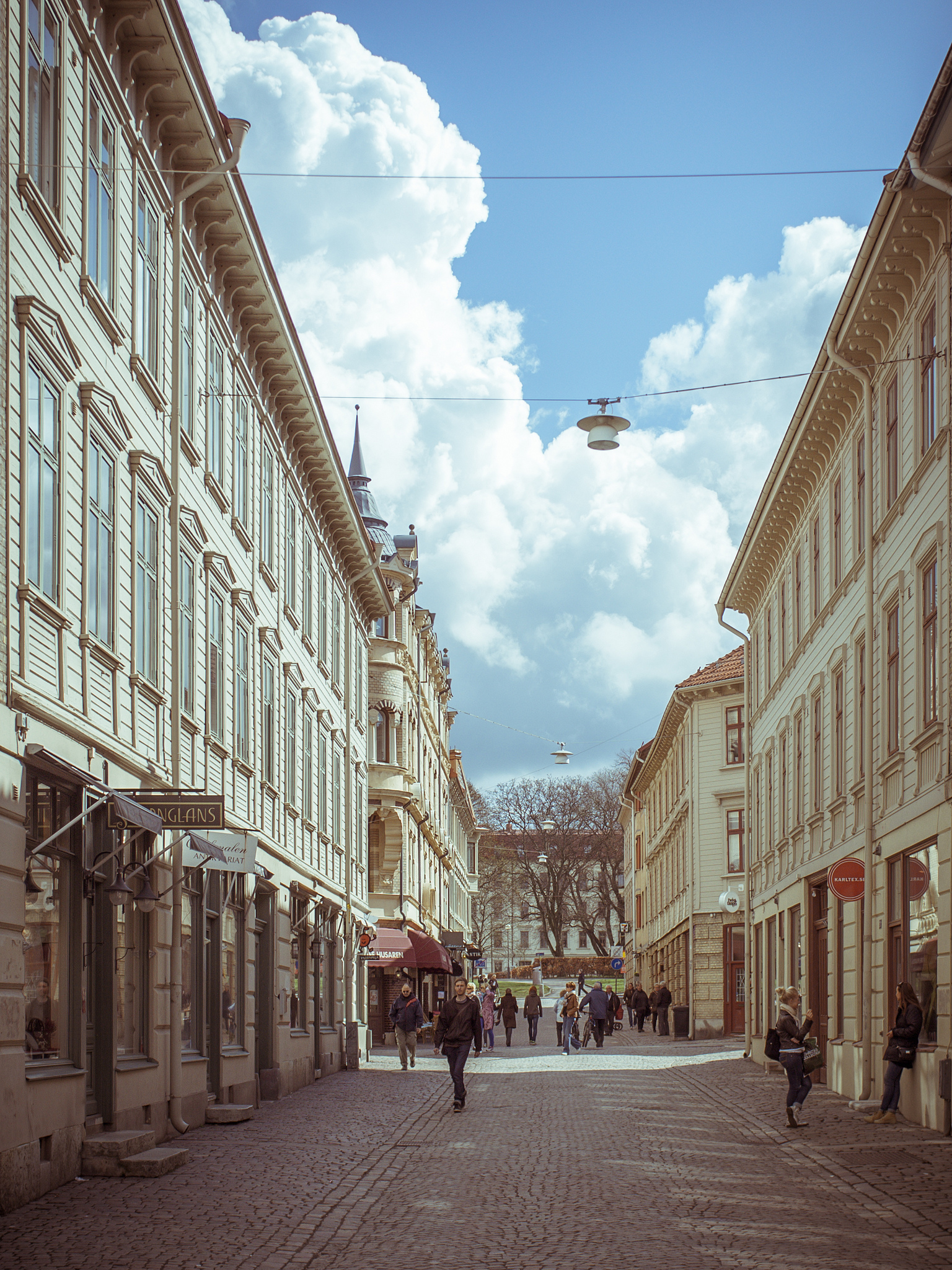 There was just one drawback as I saw it: it came with a fixed prime lens.

After talking myself into locking myself into the fixed 23mm lens “system” would not be such a bad thing after all, I pre-ordered one. I convinced myself into believing that not being able to purchase additional lenses would actually save me money in the end. This was all just some kind of reality distortion field I created for myself, of course. But in the end, it did not matter.

So the camera arrived and I spent a whole evening just reading through the manual and setting the camera up. There are quite a few settings. What might be confusing at first is that some of these settings change depending on what the physical knobs are set to. Also, some settings also affects things you wouldn’t expect. Understanding the software settings and the physical characteristics is key to mastering the X100.

I instinctively set it to shoot RAW only and started carrying the camera with me everywhere I went. The image quality was just stunning. It matched the image quality and surpassed that of consumer DSLRs in many cases. I truly felt this was an awesome camera. But a lot of shots were out of focus when I brought them (RAW files) into post production. How come? 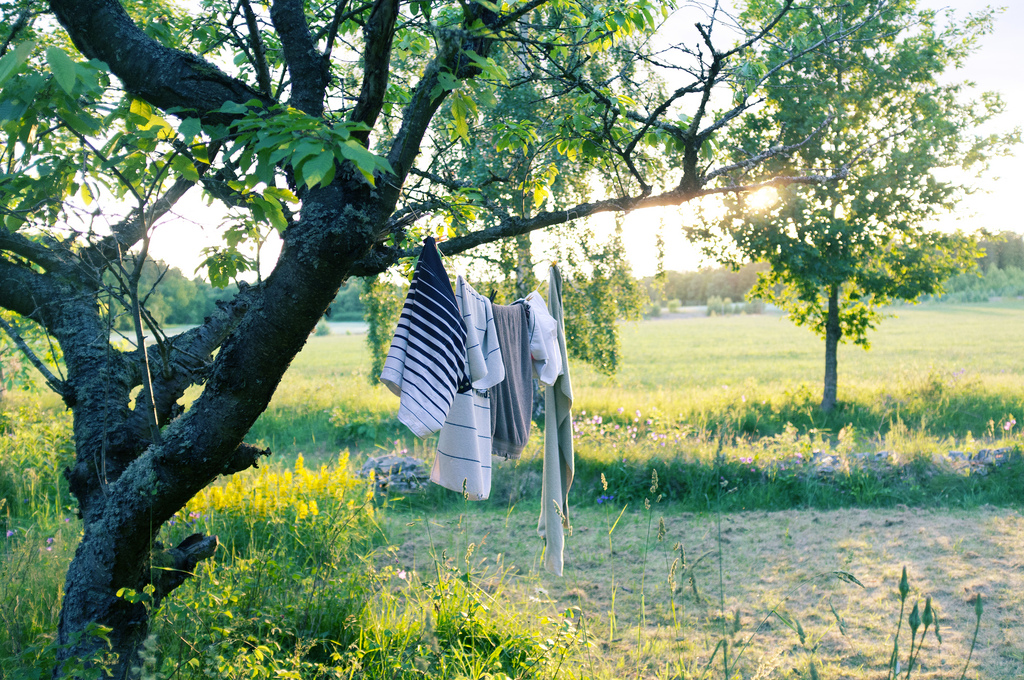 It took me a while to figure out that the X100 uses something called contrast detection when trying to find focus in an image. Compared to a DSLR, which uses phase detection, one should never try and find focus at the edge between two objects of different depth with contrast detection. Being used to focus on the contour of a person (why I don’t really know) I had to change my behavior, as this often got the background in focus rather than the person. After having realized this, most of my shots were dead on focussed. But I still had an issue with not having time to focus before the object had moved further away or closer to the camera, leaving it out of focus anyway. This was something I learnt to live with, and realized the X100 was not meant for fast moving objects.

I even tried to “prepare” the camera for the most common situations. So I set it to manual focus and set the aperture to f/11 or f/8, and manually turned the focus ring to make everything in focus from within a distance of 4-5 meters from the camera and to infinity. By setting up the camera this way (also called “zone focusing”), one could turn it on and simply shoot objects of that distance without really caring about focusing first. If I had to set the focus closer, I would just hit the “AFL” button, which would trigger an auto focus run and then I would shoot. The manual focus ring required way too many turns to prove usable so I never really used that feature other than “pre-focusing” before stepping outside. This is basically how I used the camera up and until version 1.21 of the firmware.

Fortunately, all of this changed in the first quarter of 2012, somewhere between firmware 1.13 and 1.21 (as it is a pretty much undocumented enhancement). Auto focus became both faster and more reliable. Some say it is like a different camera, and I would agree. Now I mostly have the camera set to AF-S and just shoot. In very dim-lit situations I use the AF-C as this seem to be better at locking focus during those circumstances. Big kudos to Fujifilm for bringing this update to existing owners, and not saving this for upcoming camera models of the X100. I hardly get any missed shots with the current firmware (as of writing this with version 1.30), although it is not as fast as a DSLR of course. 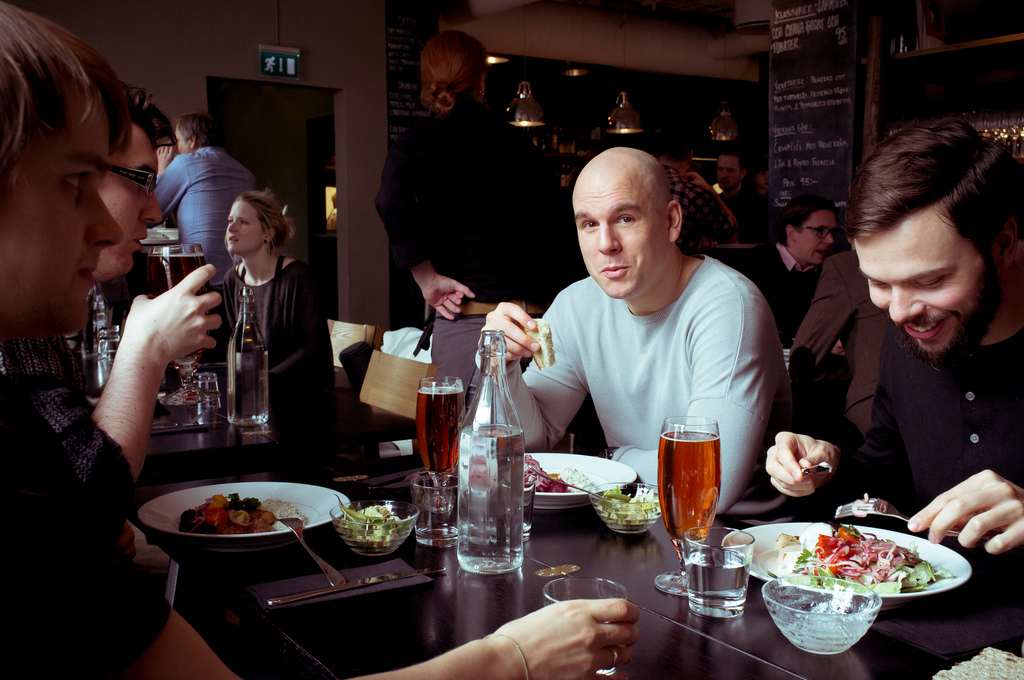 Ever since the X100 launch, there has been this debate going on whether to shoot JPG or RAW using the X100. For me, it felt natural to shoot RAW only, as I am used to edit pretty much everything in post production. However, with the X100 I started noticing that it produced pretty good JPGs right out of the camera too, as long as you would get the exposure right. Since my free time is limited these days, it’s nice to know you get really nice JPGs, especially when coming home from vacation with hundreds or even thousands of photos. Of course there are always those 10-20% of the shots that makes it worthwhile to have the 12-bit RAWs there with its absolutely stunning dynamic range, in order to edit them into perfection or in order to save them from being discarded. So I shoot RAW+JPG.

However, what will always be better with the RAW is the noise/grain. The JPG engine of the X100 produces a jittery and smeary looking grain which gets worse as you go up the ISO. This is probably a result of the JPG compression settings in combination with the noise reduction feature. Usually this is not really visible until you start zooming/cropping into the picture. If you set the Shadow Tone to anything below “Standard”, it usually becomes even more visible (because that’s where the noise is). I would have preferred larger JPG file sizes and higher compression quality settings (if that’s what’s causing it).

Edit: Having said this, this is comparing RAW to JPG and the JPG quality is absolutely stunning compared to most other cameras I’ve dealt with.

But what is worth mentioning and often forgotten feature of the X100 is the built-in RAW developer. You can always select a RAW file and develop it into JPG using other settings, tweaking shadows, highlights, sharpness and film simulation. This is often enough in order to produce a great looking JPG without the need of bringing it into the computer. Oh how I would love to see this as a piece of standalone software (or plugin) rather than having to develop photos one by one in-camera. 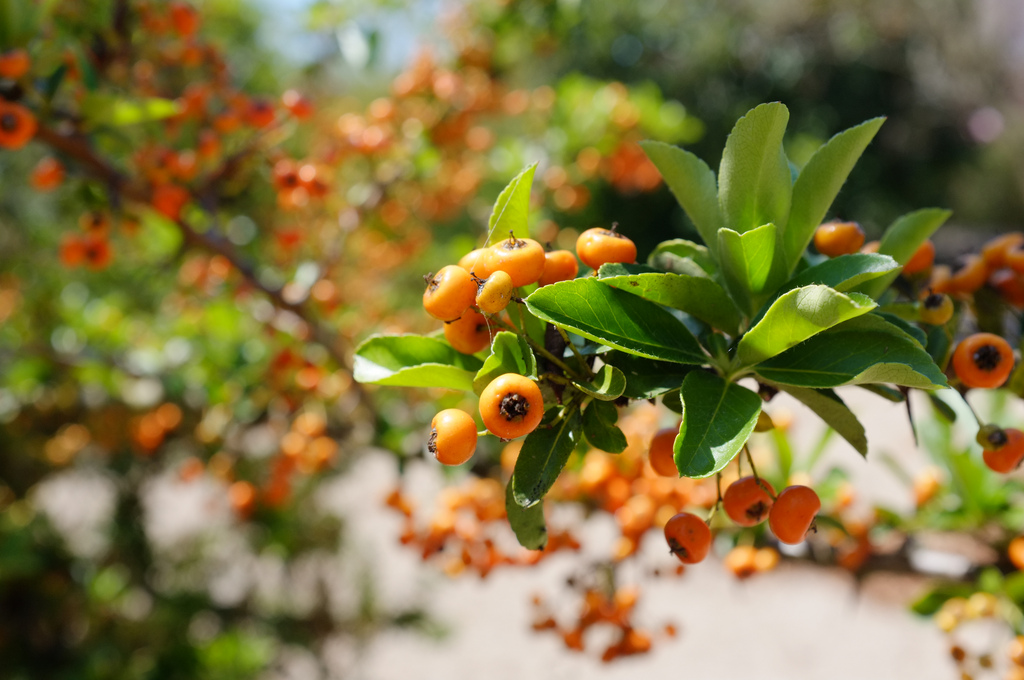 The built-in ND filter is just terrific. Shooting outdoors at full aperture (or at f/4 which I prefer) during a bright summer day is a breeze. Being able to map this function to a custom button is perfect.

It feels like the X100 is equipped with the world’s fastest fill flash as it syncs to extreme shutter speeds. Just mind the lens hood if you have one, or you will only get fill flash in the upper portion of the frame. One solution to this could be to mount a 49mm to 37mm step down ring onto the X100 instead of a lens hood.

Unfortunately, the video mode is quite disappointing. For some reason it is not possible to manually change focus during recording using the MF ring or the AFL button. I don’t know how one would shoot video without this feature unless you shoot static objects and refer from moving either the object or the camera. Hand held videos look super shaky even when you try to hold it still (probably because there is no image stabilization). I’d also say that the video compression is set way too high (meaning bad quality) for this type of camera. Nuff said. 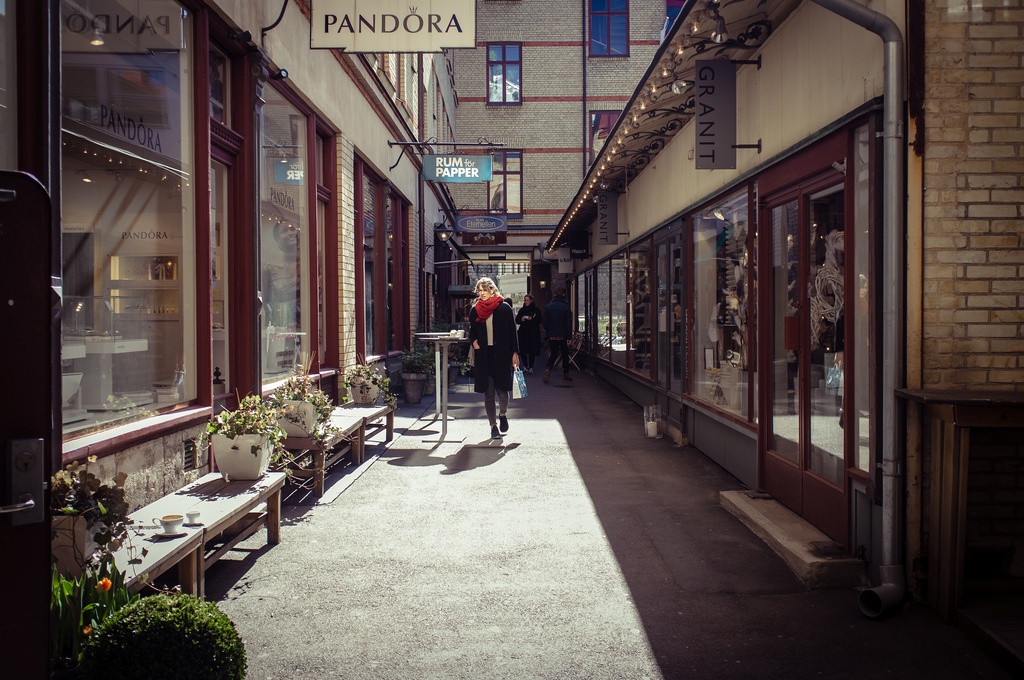 This was one of my main concerns when getting the X100 but most of the time, it’s really nice not to even have the option to carry any lenses around with you.

Some photographers say it makes you actually think, makes you plan your shot and move around more to find that perfect angle – but there are times when I feel I really would have wanted a telephoto conversion lens as I can’t get close enough during e.g. concerts.

And so Fujifilm just recently released a wide conversion lens. Doh. Even though highly unlikely, I’m still keeping my fingers crossed for a telephoto conversion as I know I’d make good use of one. 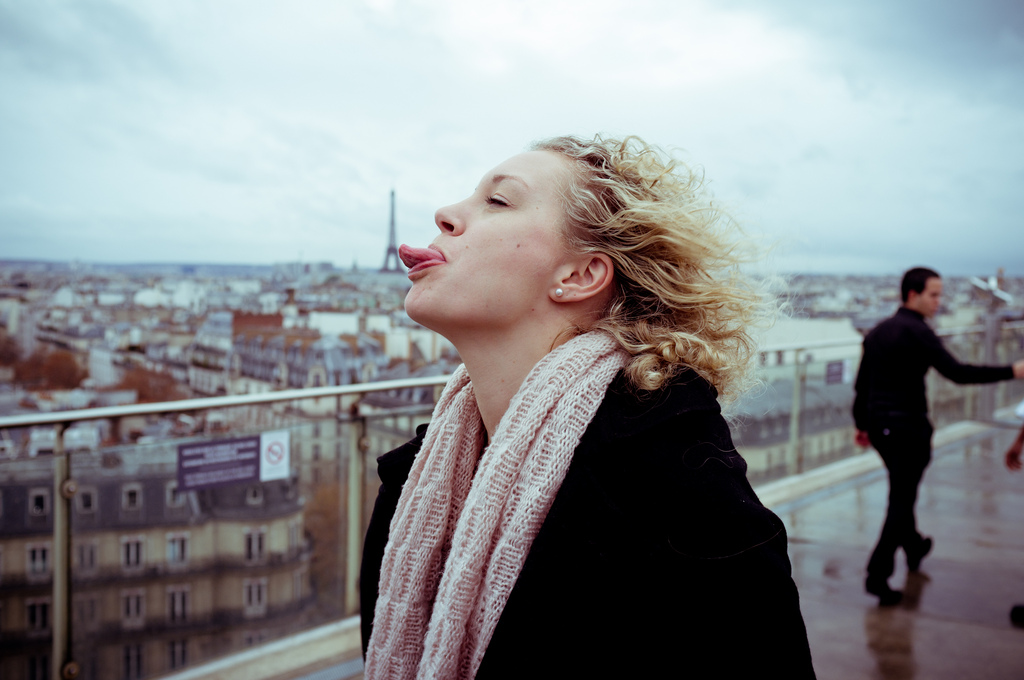 I actually don’t feel like a total geek when walking into a cafe carrying this camera, as would have been the case with a DSLR. People doesn’t notice you or worry that you would have their photo taken as the camera somehow looks like an accessory, a blast from the past; a camera that won’t be able to capture the detail of your skin’s pores and in a snap have digitized images of a bad hair day uploaded to Facebook. People stay spontaneous and relaxed. It’s not an obtrusive and immensely advanced piece of technology that’s pointing in their direction. Well, at least that’s what they think.

It’s funny. One of the prominent X100 online forums has this one thread from 2011 which is still active today, and I wouldn’t be surprised if it’s the longest thread in the forums too… Guess what it’s about. Yep. It’s about what your X100 looks like.

I think this is an important selling point for the X100. It’s unobtrusive looks and quite fashionable appearance makes it into an accessory that I want to wear and people like to have their photo taken with it. It really sets it aside from DSLRs even more.

After having used the camera for about a year, lug wear from the triangle ring neck is unfortunately becoming apparent. I’d recommend not using the ones supplied by Fujifilm and instead resort to circular rings or Gordy’s string straps.

I’ve noticed quite a lot of X100 owners have moved onto the X-Pro1. I’m actually not a huge fan of it, though I reckon the image quality is better than that of the X100. It’s the portability vs image quality of the X100 that got my attention and it’s still undefeated on that note when taking price into account as well. 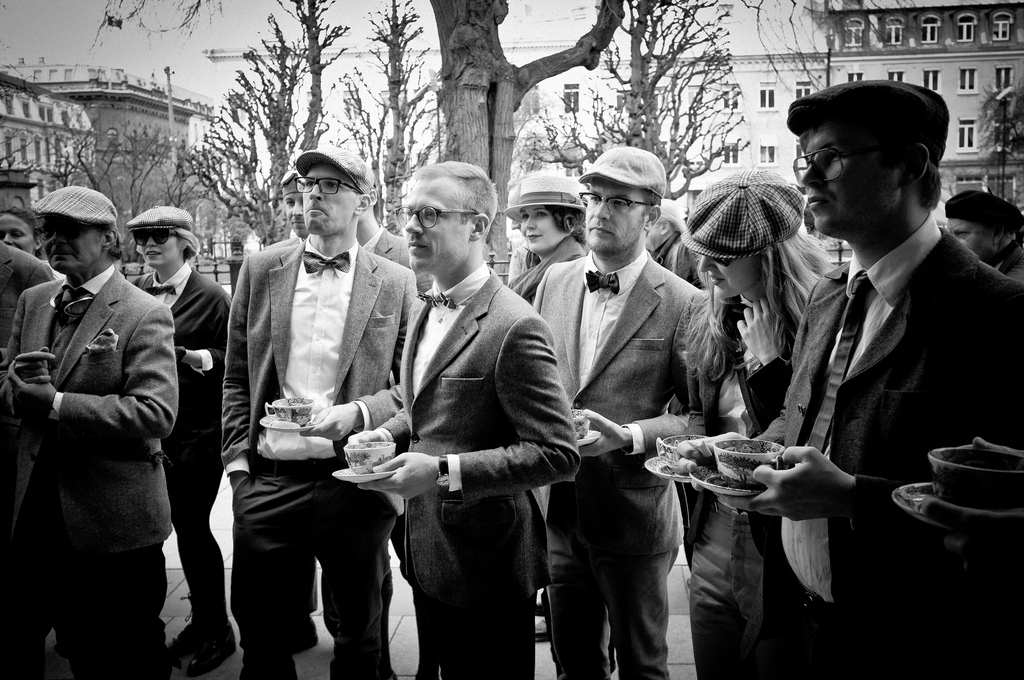 The X100 has many quirks, and there are lots of software improvements I hope Fujifilm will address. Despite this, the X100 is hands down the best camera I’ve owned for taking with me everywhere I go – be it work, vacation or just a walk.

Check out my X100 data page at 2012-02-02-fujifilm-x100-settings-and-notes for more info on details regarding the software settings.

Make sure to check out some of my other X100 articles: